So, Journey Along the Anduin was a rousing success.

The video of the run is posted here, and you should watch this space for an upcoming write-up in the next few days. 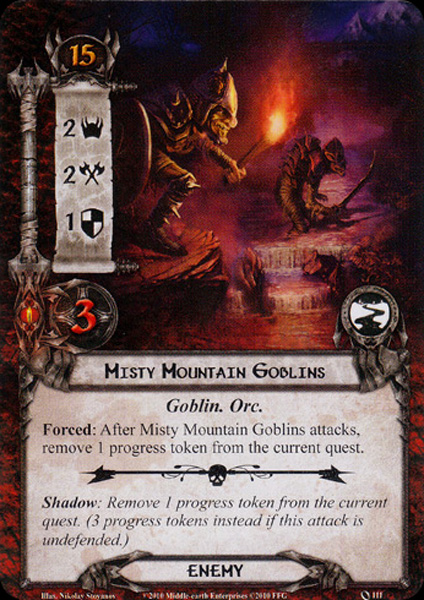 Unfortunately, the play was marred by a small mistake right towards the end – I engaged and killed 2 Misty Mountain Goblins, but forgot their Forced effect that removes progress from the quest.  That could have invalidated the run through, because I made exactly the right amount of progress to advance the quest that round. Luckily, all I needed to do was engage the Dol Guldur Orcs that came out that round, defend with Eleanor, and kill them with Legolas to add the last 2 progress to the quest and advance at the end of the combat phase. The game would then proceed without a hitch. The second Hill Troll would have gone as a Shadow card to the Orcs, and upon advancing, an Eastern Crows would have been revealed as the final card, surging into an Enchanted Stream. I would have quested well enough not to raise my threat, defended the Dol Guldur Beastmaster and the Eastern Crows, and killed both of them that round. (I also forgot to raise deck 1’s threat for the Deep Knowledge I played, but that one had no effect on the game.)

I actually like the way it happened in the video better – it resulted in a much more satisfying final round. Eleanor got a chance to make some epic plays, there were a few major setbacks, and a bunch of sequences that will be perfect for raising the dramatic tension.

Anyways, it’s nice to see that our set of thematic decks can handle a challenge that was a little bit harder than the tutorial quest for the game.

Of course, we’re not nearly out of the woods yet.

Up next is Escape From Dol Guldur, a quest that is largely known for being ridiculously difficult, and home to fond memories of losing dozens of times in a row, bashing deck after deck against a seemingly impenetrable puzzle, and then finally giving up in frustration. What’s not to love about that?

While it has mellowed (somewhat) with age and an expanded card pool, it is still most likely the most difficult quest in the game for solo players. And it can still be a rough ride for a two-handed fellowship as well, especially since we are going to restrict ourselves to narrative decks. 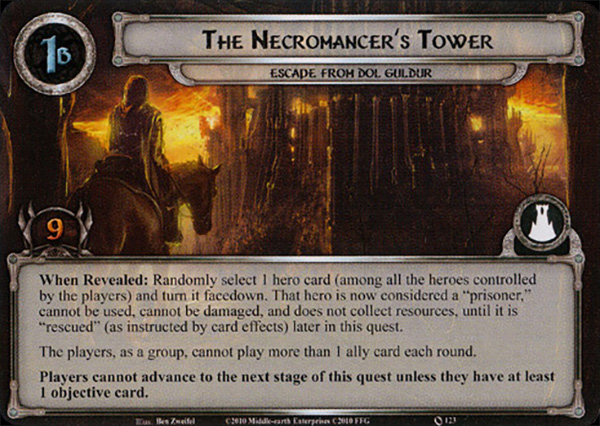 Escape from Dol Guldur offers a number of nasty challenges right from the get-go. The first issue is the setup – with 3 cards revealed guarding the initial objectives, we can start with a great deal of threat in the staging area before the game has even begun, and without any resources on our heroes, we are even vulnerable to Caught in a Web or the When Revealed effect on the King Spider, which will leave us without the use of two heroes for the first round of the game.

Worse still is the prisoner mechanic. After setup, a randomly chosen hero will be turned face-down and not be available until we manage to place the first progress token on Quest Stage 2. So one of our decks will potentially be crippled, and what’s left will have to face a potentially massive threat in the staging area.

But the worst effect in Escape from Dol Guldur is the effect on the first two quest stages that prevent the players as a group from playing more than a single ally each round. The strategy we have relied on so far – playing a bunch of questing and defensive allies while we slowly build our heroes up to be combat powerhouses – is not going to fare too well. We are going to need decks that can rely on their heroes to handle the early game on their own, and tailor our strategy to not being able to play more than one ally per turn. 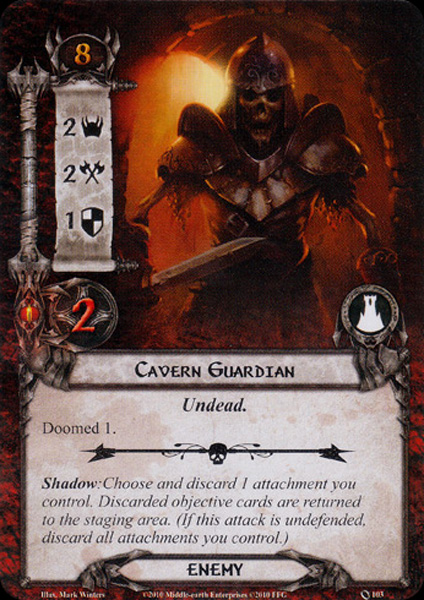 This quest includes a number of nasty enemies we have seen before – the Spiders of Mirkwood set returns to plague us in a much more difficult quest than we have faced them in before, and the Dol Guldur Orcs will continue to make our lives difficult. The new enemies in the quest are not especially annoying in comparison – the Cavern Guardian is simple to defend against and to dispatch, while the Dungeon Jailor has a high engagement cost and low threat. While 3 defense and 5 hit points can be difficult to chew through, as long as we can quest successfully – thus avoiding his Forced effect, which forces us to shuffle an objective card into the encounter deck if we are unsuccessful in our questing – we can just leave him there indefinitely.

The new treacheries are likewise generally benign. Iron Shackles denies one deck its next card draw, and Under the Shadow boosts threat in the staging area for a single round. We’ll be letting both resolve unless there is a very good reason not to. As in Passage Through Mirkwood, we will be saving Eleanor to cancel Caught in a Web or Necromancer’s Reach. Everything else is going to be just fine.

The most dangerous card in the encounter deck is still Ungoliant’s Spawn. At least one of our decks ought to run A Test of Will just to be able to cancel that When Revealed effect, and a defender capable of consistently blocking a 5-attack enemy will be a must.

Of course, we can’t ignore the boss enemy of this scenario. The Nazgul of Dol Guldur is as durable as a Hill Troll, but far easier to defend against. With only 4 attack, even Eleanor with a Gondorian Shield can consistently hold off the creature. However, the passive text effect on Sauron’s servant is what makes this enemy truly dangerous. Every time a shadow effect dealt to it resolves, the defending player must discard a character. Combined with the ally-playing restrictions on the first 2 stages of the quest, we run the risk of hemorrhaging characters if we keep it around too long. But leaving it in the staging area isn’t really a viable option, either. With 5 threat, it presents a formidable obstacle to our ability to clear the quest stage.

So, a means of cancelling shadows – ideally, a repeatable one – will be something we need to keep in mind as we build our decks.

This encounter deck can hit hard and early. Nearly half of the enemies in the deck have an engagement cost of 20 or below, and the lowest has just 8, so we can’t rely on questing with everybody in the early game and just not engaging enemies. We’ll need enough combat power from round 1 to kill small enemies before they can swarm us, and we’ll need to be able to build up to enough power to kill enemies like Chieftain Ufthak or Ungoliant’s Spawn. And the Nazgul. Never forget the Nazgul. Ideally, by the time we have to engage these heavy-hitting enemies, we want to be able to kill them in a single attack.

Luckily, the shadow effects in this quest are much less nerve-wracking than in Journey Along the Anduin. Nothing near as bad as Despair will show up to boost our enemies. The only attack boosts will come from Dol Guldur Orcs, but they should make us reticent to take undefended attacks – that +3 attack boost will kill our heroes. Aside from that, there’s Hummerhorns – which we should cancel with extreme prejudice – and a little bit of attachment hate. By and large, though, we aren’t going to need a single super-defender as much as we are multiple defenses against small attacks.

So, having examined the quest and its encounter deck, let’s look at the theme of the quest. The story text tells us that one of our companions was captured while we were scouting near Dol Guldur on behalf of the Lady Galadriel. The prisoner, of course, is the randomly chosen hero noted above.

This could cause immediate narrative issues for us. The biggest issue is the random choice of prisoner – because the second deck has traditionally been a deck of allies helping us, I’d really like to get one of our core heroes captured and rescue them with the aid of Lorien. That will have a much better narrative impact than our heroes going to rescue a random silvan character (who we have possibly never met!) from the dungeons of the second-most-dangerous stronghold of Middle-Earth.

But I don’t actually have control over which character gets captured, unfortunately. The good news is that there is a narrative break between  Journey Along the Anduin and Escape from Dol Guldur. In between, we apparently deliver our message to Galadriel and get conscripted to go scout out the Necromancer’s Tower.

So, I intend to make full use of that. If I switch out one of my heroes, and indicate that they were captured, I can control the story without having to weather the fickle winds of random chance. And then, when another of the heroes is captured at the beginning of the game, I can weave it into a seamless narrative. So far, so good.

Upon reflection, I think I’m going to leave out Lanwyn, purely for narrative reasons. Escape from Dol Guldur includes a few surging locations to trigger her ability, and the willpower and extra attack would certainly be more than welcome.

But at this exact moment in our story, Lanwyn is a frightened girl from Dale, caught up in events she doesn’t understand or know enough to care about yet. She was just helping get Eleanor to the Elven-king’s halls, after all. And she only came with the party through Mirkwood because it wasn’t safe enough to send her home with only her brothers and Thalin to protect her. So far, she hasn’t had many opportunities to exercise agency of her own, and I’m getting the feeling that if she had a choice right now, she’d be going straight home on the next express train. 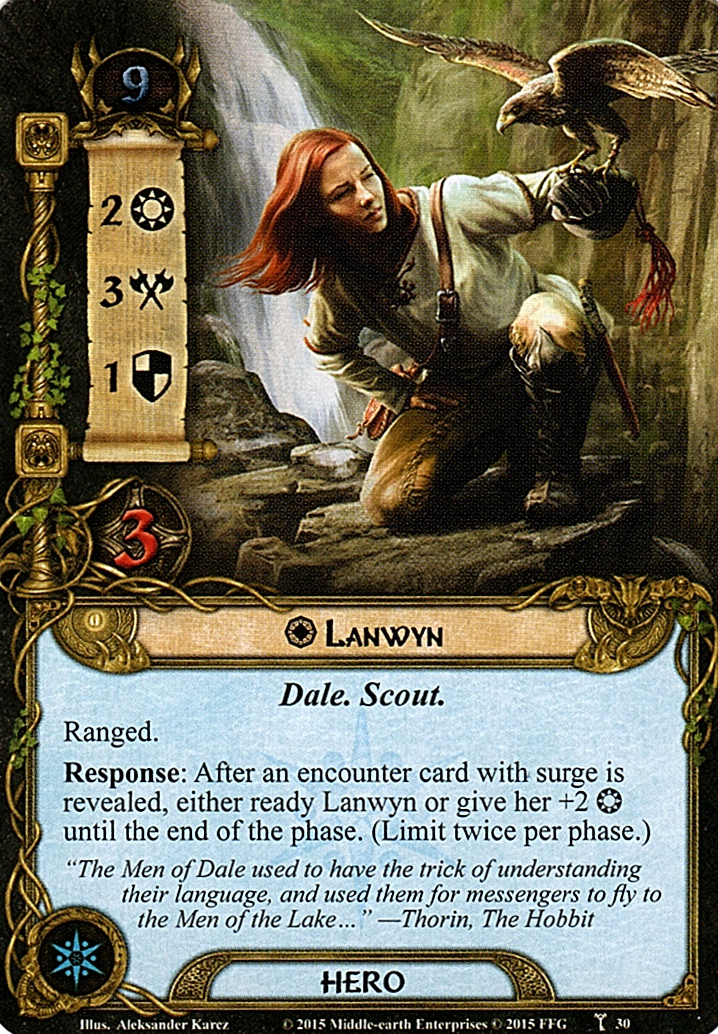 If I’m going to be using her for the long haul – and I want to, because her character intrigues me just as much as Eleanor’s does – she needs something to bring her on-board. The whole fight against the Shadow needs to become personal to her.

Capture and imprisonment in the dungeons of the Necromancer might break some people. But, as we saw in Passage Through Mirkwood, Lanwyn has got a tremendous reserve of inner strength, even in the face of overwhelming terror. I rather expect that her experiences in the Necromancer’s Tower will help give shape to that inner strength of will, and give her a purpose to bend it towards.

One thing’s for sure. After this quest, nothing will ever be the same again. And I have a feeling that the little girl from Dale is going to grow to become one of the fiercest foes of Sauron.

Up next, we’ll take a look at the decks I’m planning on taking to Dol Guldur and (hopefully!) back. Also on the upcoming list will be the narrative write-up of our adventure down the Anduin River. Hope to see you when we get there!

One thought on “Meditations on Dol Guldur”