The blistering pace of updates to this blog is likely to slow down in the near future. As we move away from simple analysis and deckbuilding posts, and towards original fiction, I expect things to slow down naturally. Writing fiction has always come more slowly for me, and that will be on top of needing to record the game turn-by-turn. If I had to hazard a guess at the pacing once things settle down into a sustainable level, I’d aim to post a playthrough of a quest every other week, with preview and deckbuilding posts (perhaps split into two different posts) coming on the off weeks. And maybe quest, card, or deck spotlights scattered throughout. Whether or not this is a realistic pace of updates remains to be seen, but it’s a goal to shoot for, at least.

But for the moment, the pace is going to continue. And now to get to our regularly scheduled content, here’s the official Agents of the White Council preview of Passage Through Mirkwood and Journey Along the Anduin!

The first quest of the Core Set is a fun little romp through an increasingly darkening forest infested with hairy eight-legged nightmares. No, I don’t like spiders. Especially not giant ones the size of a horse. And don’t get me started on Shelob from the Peter Jackson films. Gives me the creeps just thinking about it. 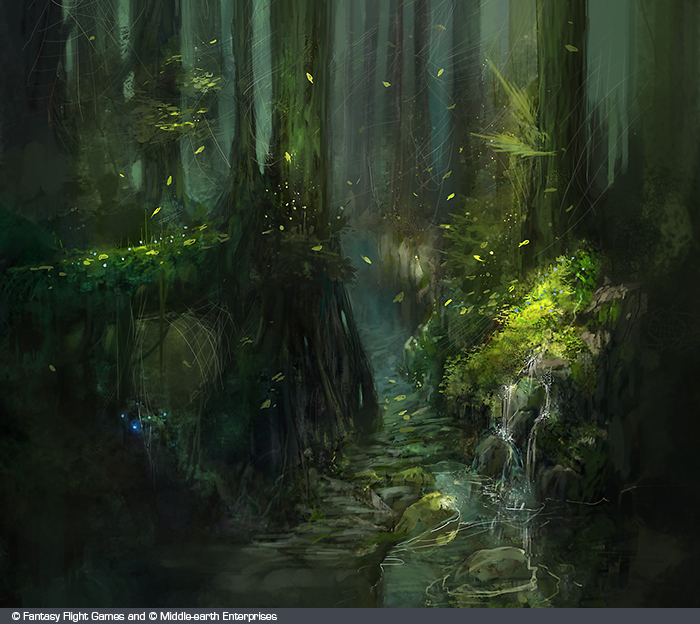 Giant spiders aside, Passage Through Mirkwood is a remarkably easy quest. It’s one I tend to play just to get a sense of how my decks are functioning, seeing if the card draw can consistently get me to the important cards, or if I need to adjust my cost curves, and other such things. So I don’t expect it to be especially challenging. That said, like all of the quests in this game, it can sometimes pull out an unexpected combo that leaves you reeling. Even on the tutorial quest for the game, sometimes the encounter deck just skewers your run with a hot iron and then twists it.

So let’s look at the encounter deck. We’ll start off with a link to the excellent analysis blog Vision of the Palantir. He’s done a great job offering strategic tips and advice on the game, and is halfway through the Dwarrowdelf cycle as of the time of this posting. I’ll be linking to his blog in every quest preview I do.

The enemies in this quest are generally pretty small – I can generally expect to defend well enough. The most annoying things are going to be the “When Revealed” effects. Dol Guldur Orcs can be annoying, especially for heroes with low hit point totals like Lanwyn. Even worse – especially early in the game – are the King Spiders, who will force each player to exhaust a character they control. 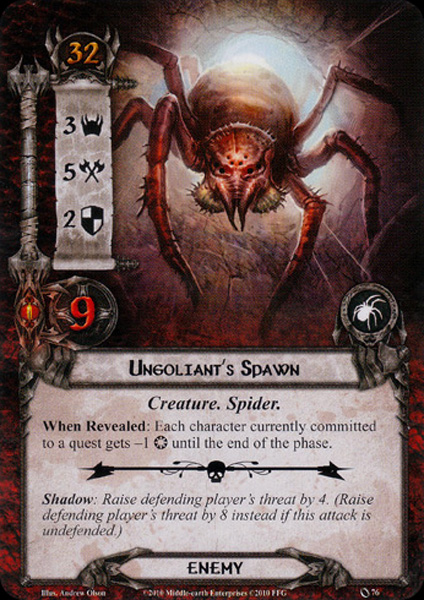 But as frustrating as these effects are, they pale in comparison to the effect on Ungoliant’s Spawn. Each character committed to the quest gains -1 willpower on the turn that card is revealed. That normally means losing the quest, possibly by a lot, which in turn means a large threat gain, which might force you to engage the obnoxious spider. With 5 attack, even Eleanor with a Gondorian Shield won’t be safe, so we’ll need to be able to boost her defense some other way. We’ll also need to make sure to bring enough attack to kill her, at least over time.

The other enemies of note are Chieftain Ufthak – whose attack increases by 2 every round he attacks you – and Hummerhorns, which will do enough direct damage to kill any hero I’m likely to bring to this quest. Against Ufthak, I’ll need to be able to kill him on the turn I engage him, or the turn after, before he becomes unbearable. For the Hummerhorns, I’ll either need to bring enough threat reduction to ensure I never have to engage them, bring sufficient hit point boosts to be able to take the damage on the chin, or find some way of killing them in the staging area.

Shadow effects can also range from annoying to potentially disastrous. There is a fair amount of attachment hate on the shadow cards, along with some attack boosts. The worst, however, is Hummerhorns. 1 damage to every character (2 if  undefended) controlled by the defending player can eviscerate a board state. That shadow effect, along with the +3 to undefended attacks on the Dol Guldur Orcs, make taking undefended attacks very risky during this scenario, and that pattern holds through most of the first cycle.

On the other hand, apart from Ungoliant’s Spawn and a boosted Chieftain Ufthak, the highest attack I can expect to face is 5 (from the Dol Guldur Beastmaster, and only if both shadow cards boost its attack), and the highest amount of attack I’ll need to kill an enemy is 6 (5, after Thalin’s damage is taken into account). The most annoying enemy – the King Spider – has only 3 hit points, so if I can find a few more sources of direct damage, I can never have to face that 3 attack.

Locations in this quest are fairly benign, and some are even helpful. The only one that could cause serious problems would be the Necromancer’s Pass, with a high threat and an annoying travel cost. Still, some location control would likely be a decent idea, just to protect against an unlucky location lock scenario.

The treachery to cancel in this quest is Caught in a Web. It’s just plain nasty – although if you have enough readying effects, it can be managed. The other one that Eleanor should cancel with extreme prejudice is the Necromancer’s Reach.

That’s it for the quest, really. The demands are not strict, and as long as we bring sufficient questing power, we should be just fine. Let’s take a look at the thematic considerations of the quest.

Thranduil, king of the woodland realm, has an urgent message that he must send to Galadriel of Lorien. It’s probably related to the growing darkness around Dol Guldur. The quest takes place entirely in Mirkwood itself, and flows directly into the following quest – Journey Along the Anduin – without a break in the narrative.

This points towards 2 considerations. First, the second deck will probably end up being a Silvan deck of some sort – ideally oriented around the woodland realm rather than Lorien – and that I’m going to be keeping these two decks together through the first two quests. Since the first quest of the set isn’t going to pose any special deckbuilding concerns, we might as well design both of our decks to meet the challenge of Journey Along the Anduin.

Journey Along the Anduin

The second quest in the core set is a leisurely boat ride down a lazy river. Except for all the Orcs trying to kill you, of course. And the ridiculous Hill Troll that tries to pound you into an appetizing paste of meat and bone shards. You know – the normal sorts of problems river voyages face in Middle-Earth.

So, our primary concern in this quest is being able to handle that Troll. The second quest stage will feature extra encounter reveals – needing a strong questing presence to overcome it, and there will be a lot of fighting right at the end, but all of these concerns play second fiddle against the all-consuming need to be able to handle that Hill Troll.

Before we do our own look at the quest, let’s look at our favorite quest analysis blog!

The Hill Troll is going to be our primary concern here. Although some hefty enemies from the last quest make a reappearance – notably, Chieftain Ufthak and the Dol Guldur Beastmaster – and new enemies provide additional challenges to our combat heroes – especially Wargs and the Marsh Adder – all of these pale in comparison to 6 attack sitting in the staging area from turn 1. 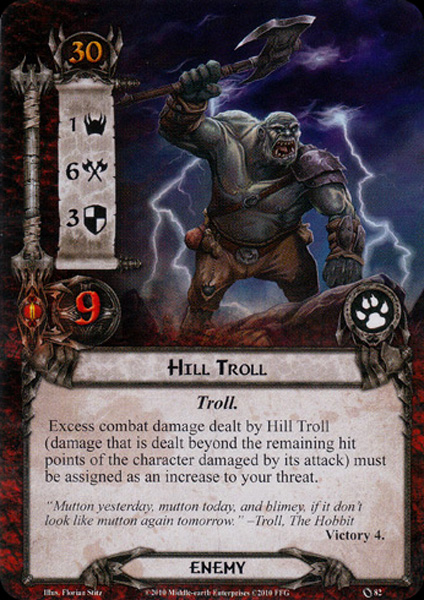 Also, it helps that Eleanor with a Gondorian Shield can handle defending most of the smaller enemies without needing additional help.

Our biggest problem is that our primary defender is just too squishy. That six attack will leave Eleanor (with her shield) barely clinging onto life with a single hit point remaining under the most ideal circumstances. Even worse is the high probability of attack-boosting shadow effects, which will send our intrepid Gondorian noblewoman to the Fallen Hero charts well before her time. So, obviously, we either need another defensive solution or some way to help boost Eleanor’s defensive capacity. In addition, 3 defense and 9 hit points means that, if we engage, Lanwyn will very likely take at least a couple of turns to bring down the creature.

One factor we do have working in our favor is our rather low threat. Starting at only 25, we have five full rounds in which to build up before we are forced to engage the troll. And with easy access to threat reduction, that could very well be even longer. So, we’ll have ample time to find whatever means of defending it we can. Also, its 1 threat means that we aren’t going to struggle to quest past it if we leave it in the staging area.

We’re also going to need to be able to face multiple smaller enemies at once. The last stage can easily dump 4 or 5 enemies into the staging area, most of which will have engagement costs that we cannot hope to remain below. Multiple defenders will be ideal here.

Our primary concern with questing in this game is going to be questing successfully during the first few quest phases. Failing will raise our threat, pushing us ever closer to engaging that Hill Troll. Our 3 willpower from our starting heroes could hurt us here – we’ll need additional questing or threat cancellation support from the other deck to pull this off.

In addition, the second stage could potentially cause us a great many problems. A third encounter card every round could easily cause threat in the staging area to get out of control. Only being able to engage 2 enemies per round might also leave us unable to clear out all of the enemies each round. Location control is going to be highly important, as is loading up on willpower.

The worst treacheries in the quest are going to be Evil Storm and Necromancer’s Reach. If we can keep our threat under control, the Evil Storms will be a blank reveal, and Eleanor can cancel the Necromancer’s Reach without much trouble, so we may not need additional treachery cancellation. Another way to minimize the damage caused by Necromancer’s Reach is damage cancellation – especially via Honour Guards. That is a pretty good way to boost Eleanor’s defensive abilities, too, so we should definitely consider the possibility.

Originally, I wanted to include the deckbuilding responses to these concerns in this article as well. However, as we’re already getting rather long here, I’ve removed them and will post them as part of the next article. Since it’s already mostly done, it will likely be up within the next hour. I’m really excited about the decks that have come out of this. I hope you are too.